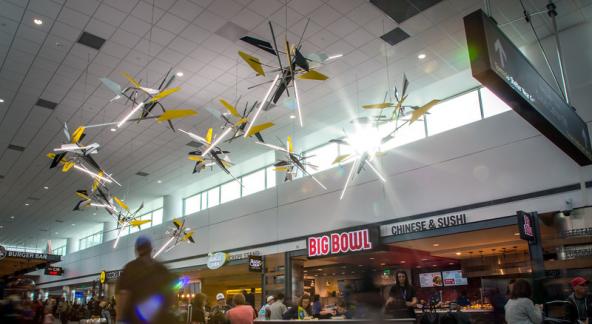 Denver International Airport’s (DEN) art and culture program presents a new installation created specifically for DEN, using the Colorado landscape and the unique tented architecture of the building, which itself echoes the silhouette of a mountain range. The installation is located overhead on the far west side of C Gates, where five new gates were added in 2013.

The installation is comprised of several suspended sculptures arranged in a spiral, the shapes of which were determined by tracing the Rocky Mountains’ dramatic profile. The spiral — or vortex, from which the work’s name is derived — is one of nature’s most common forms, found in elements as small as snail shells or as large as galaxies.

Anibal Catalan, born in Iguala, Mexico, has since 2003 built an international artistic practice rooted in his academic foundation as an architect. Bridging his long-standing interests in the Russian avant-garde of the early 20th Century and radical architectural movements of the 1960s, Catalan’s work can be described as an archaeology of futures past and unrealized utopias. Catalan is a graduate of Mexico City’s most prestigious arts academy, La Esmeralda, and has exhibited extensively throughout Europe, the United States, Latin America, and Asia. He lives and works in Mexico City and is represented by the gallery Yautepec