Spirit of the People 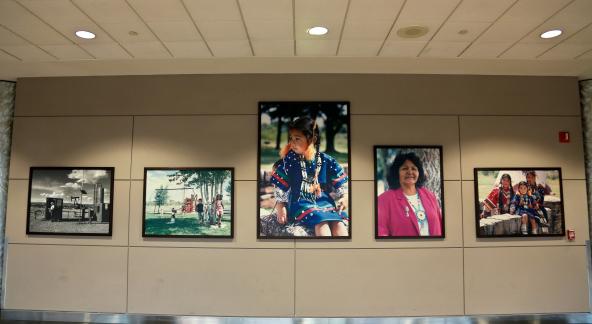 The project brought together the coordinated efforts of numerous Native Americans residing in Colorado as well as several native tribes that are presently located in neighboring states. These individuals comprised a panel that was responsible for approving the general criteria for the artwork and artist selection. The Western American Indian Chamber (WAIC) managed the project. Participating Indigenous tribal nation representatives include the Apache, Arapaho, Cheyenne, Comanche, Kiowa, Navajo, Pawnee, Shoshone, Lakota, Ute, and Pueblos. Two tribal nations, the Ute Mountain Utes and the Southern Utes, have their homelands in Colorado. Art forms used in the exhibition are painting, photography, music and narration.

Spirit of the People: A Native American Exhibition is a component of the inaugural artwork commissioned specifically for Denver International Airport during its original construction. The 90 works in the series include 78 photographs, 11 paintings and one music recording.

A set of 62 photo murals contain images of people from the Indigenous tribal nations that occupied the region in the 19th and early 20th centuries. Large painted murals depict Indigenous life in parts of region approximately 7,000 to 10,000 years ago and continues with the ancient Pueblo people who lived in Colorado approximately 1,000 years ago. The photo murals were obtained as negatives and prints from the archives of the Smithsonian Institution, Colorado History Museum, Denver Art Museum and Denver Public Library. Two of the four paintings represent the early Indigenous occupants while the other two represent ancient Pueblo culture.

The music of duo “Red Tail Chasing Hawks” (Calvin Standing Bear and James Torres) can be heard while walking over the Concourse A passenger bridge. A 43-minute long series of compositions, specifically written for the airport and the Spirit of the People project, includes Native American chanting, drumming and flute playing in both traditional and contemporary styles.

This portion of the installation is temporarily in storage due to Great Hall Construction within the terminal. All artworks will return once construction is completed.

This series of 27 large-scale photographs and paintings depict contemporary life of American Indians in the region. Several of the photo murals portray members of the two tribal nations, the Southern Ute and Ute Mountain Ute. Topics within the artworks include academics, agriculture, military, hunting, recreation, traditional clothing, dance, and spirituality. The contemporary paintings within the series embody various Indigenous people and themes.