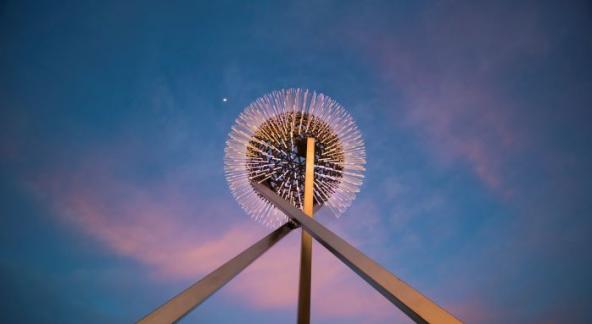 Luminous Wind is a 27-foot tall sculpture inspired by innovation, energy and the natural environment. Constructed from environmentally activated materials, the 952 prismatic clear acrylic rods within the piece reflect and refract sunlight during the day and radiate out from a stainless-steel geodesic sphere that is set on a tripod of stainless-steel columns. At night, each rod is illuminated by an individually programmable color-changing LED node, resulting in a mosaic of shifting light colors and patterns to create a myriad of spectacular dynamic and vivid nighttime effects. A different moving light show each night of the week cycles through the sculpture, while holidays are marked by special colors and programs. Additionally, the design incorporates a wind sensor that triggers an increase/decrease to the light movement, creating a barometer that visualizes and broadcasts wind patterns.

Luminous Wind creatively draws connections between Peña Station NEXT, a technologically infused master-planned Smart-City, Panasonic technology, and Denver’s former mayor, Federico Peña, the namesake of both Peña Boulevard which leads to the airport and the transit station situated on airport property.

Since 2001, Seattle-based collaborative artists Laura Haddad and Thomas Drugan have created conceptually driven site-specific artworks into large-scale infrastructure projects. Luminous Wind was commissioned for the commuter rail line station that is located on airport property where the RTD A-Line operates between DEN and Downtown Denver. The art piece can be viewed from the train station, while riding the RTD A-Line and from Peña Boulevard.