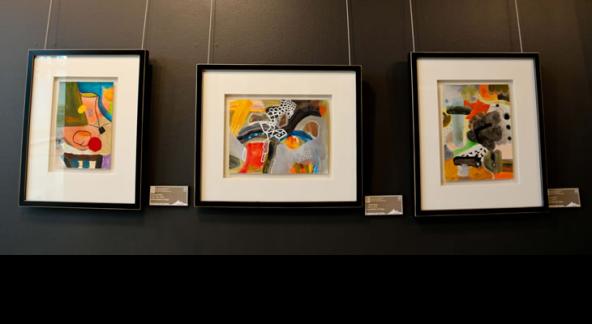 Denver International Airport’s (DIA) Art and Culture Program presented paintings and works on paper by prolific Denver-based, Japanese-American artist Homare Ikeda. The exhibit was made possible by William Havu Gallery, based in the Golden Triangle Arts District of Denver.

The timing of the exhibition coincided with the one year anniversary of the inaugural flight between United’s hub in Denver to Tokyo-Narita International Airport on June 10. The daily flight marked the Mile High City’s first nonstop connection to Asia.

"We are delighted to exhibit the fine art of one of Colorado's most prolific Japanese-American contemporary artists,” said Chris Stevens, DIA’s Manager of the Art and Culture Program. “It is our hope that passengers and airport visitors will take away a refreshing perspective and approach to viewing contemporary Japanese-American art."

Born on the subtropical island of Yoron, near Okinawa, Japan, Homare Ikeda spent his childhood exploring the island and the coral reefs surrounding it. After high school, he left his small island world to explore Japan and India. Ikeda had no exposure to the world of fine arts but was interested nonetheless, teaching himself Japanese brush painting by copying pictures out of books and later becoming interested in Contemporary Art.

In 1978 he moved to the United States. The artist credits a college professor in Stockton, California for setting him on the right artistic path. “He was a wonderful art professor,” said Homare Ikeda. “He spent all his energy on his teaching.” This same professor guided Ikeda to the University of Colorado at Boulder where he received both a BFA and MFA. Today, the artist teaches drawing and painting, while continuing to show his work in group and solo shows as well as expand his base of collectors.

Homare Ikeda explains his painting, “I begin my painting with a simple vision. The first stages are usually kept fluid and open. As the painting progresses, I keep adding or scraping the layers of paints. I see them as the metaphor of life. At a certain point in this process, the painting starts to take over my control. The painting is transformed to the state of unknown. There, I put down my paintbrush.”

According to the artist, his work can be linked to classic Abstract Expressionism and to the later Neo-Expressionism, but it’s difficult to see any traditional influence of Japanese painting. This blending of east and west gives Ikeda’s paintings their unique look; a look that evokes an innocent time and yet is surprisingly revelatory when examined up close.