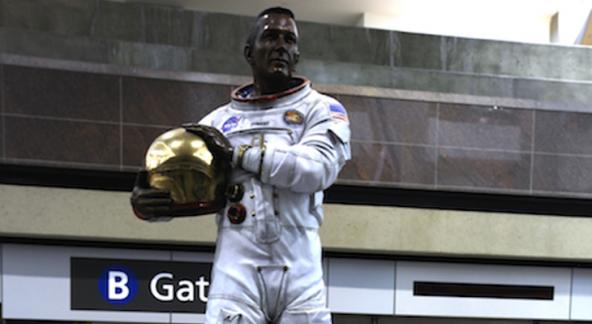 John L. "Jack" Swigert, Jr. was born in Denver in 1931 and died in Washington, D.C. in 1982. He was a star football player at the University of Colorado and obtained a B.S. Degree in Mechanical Engineering. He became a Fighter Pilot in Korea and Japan and was a test pilot for two aviation companies. When he applied for astronaut training, NASA turned him down. He then decided he needed more education and attended two universities and received two master's degrees. He applied again and NASA accepted him as one of the few civilians in the program and he become the command module pilot on the moon flight Apollo XIII. The space ship was 250,000 miles from earth when an oxygen tank exploded. The tank fed the fuel cell. "Houston, we have a problem here" was his calm voice regarding the situation. With the help of Mission Control in Houston and fellow astronauts James Lovell, Jr. and Fred Haise, Jr., he maneuvered the crippled space ship around the moon and steered the ship to a safe landing. He was later elected to Congress, but died of cancer seven days before assuming office. This statue is an exact replica of the one in the U.S. Capitol in Washington, D.C.

The Lundeen brothers are prominent members of the community of sculptors in the city of Loveland, Colorado.