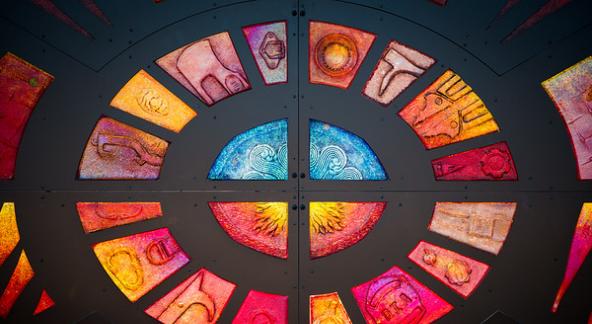 “Beacon,” by Seattle-based artist Steve Gardner, is a laser-cut aluminum and fused glass work of art installed within the west façade of the Fire Station 35 building. The artwork was inspired by the Denver Fire Department’s connection and service to the airport and its passengers. The $200,000 project was paid for via the City and County of Denver’s “One Percent for Art” ordinance, which dedicates money from certain new construction projects to public art.

Backlit at night, the piece is intended to create the sense of a “beacon,” shining over the surrounding area. Aerial views of downtown Denver and airport street grids and geography provide a background to the central image of the traditional firefighters’ Maltese cross. According to the artist, a symbolic beam of light and energy is projected outward and over neighborhood and airport streets, symbolizing the firefighters’ vigilance and protection of the communities they serve. The piece also includes glass cast reliefs of the equipment and tools that the firefighters use.

Seattle artist Steve Gardner studied art and biology at St. Olaf College in Northfield, MN, and later received his master’s in ceramic sculpture from Central Washington University in Ellensburg, WA. He works primarily in large-scale commissions, ranging from ceramic relief sculpture to large murals of metal and cast glass. Much of his work is focused on creating a sense of place, often by taking inspiration from nature, science and storytelling.