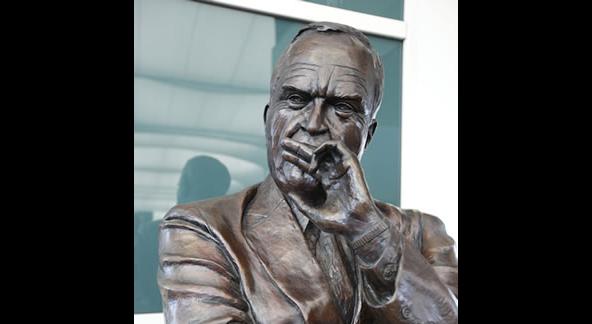 This bronze sculpture honors the memory and work of William "Bill" Smith, who was the Manager of Public Works for the City and County of Denver during the time that the airport was being built.

Born in Telephone, Texas, Bill Smith was a civil engineering graduate of the University of Colorado, and spent 28 years in the Denver Public Works Department. He provided crucial leadership for the planning and construction of  Denver International Airport, which opened in February of 1995.

Ed Dwight's resume reads: former Air Force test pilot, America’s first African American astronaut candidate, IBM Computer Systems engineer, aviation consultant, restauranteur, real estate developer and construction entrepreneur can best be described as a true renaissance man. Ed Dwight has succeeded in all these varied careers. However, for the last 30+ years, Ed has focused his direction on fine art sculptures, large-scale memorials and public art projects. Since his art career began in 1978, after attaining his MFA in Sculpture from the University of Denver, Dwight has become one of the most prolific and insightful sculptors in America.