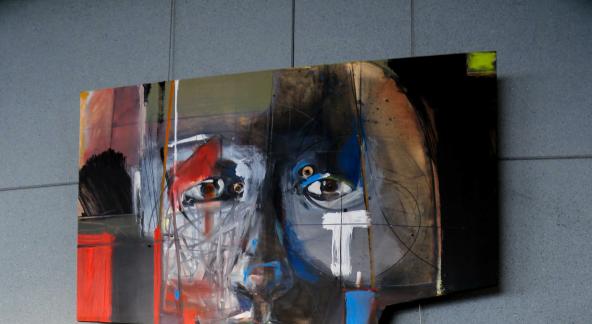 “Paintings for Airports” was a collection of 28 original oil paintings created in the Abstract Expressionism style. The exhibition was dedicated to Smith’s father, Harry E. Smith, a World War II pilot who flew 30 missions in "Smoky Liz II," a B-17, with the 452nd Bombardment Group.

Craig Marshall Smith is a well-known Colorado painter who was the drawing coordinator at Metropolitan State College of Denver from 1977-2003. He retired in 2003 as a Professor Emeritus. Smith credits Franz Kline, Richard Diebenkorn and Jim Dine as his mentors in painting. His work shifted from Figurative painting and drawing to Abstract Expressionism around the turn of the century. He now writes a weekly opinion column for eight Douglas County, Colorado newspapers. A compilation of Smith's columns, "This is not a Dachshund," was a finalist for Colorado Book of the Year in Creative Non-Fiction in 2014. He resides in Highlands Ranch, Colo. where he continues to paint.