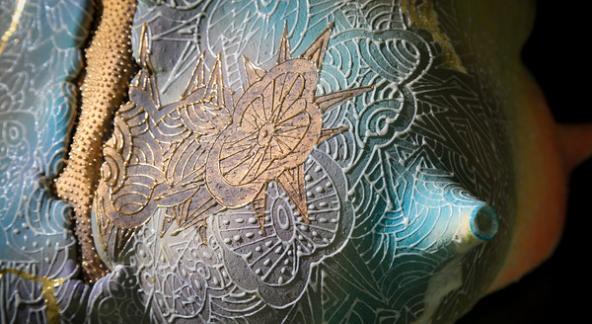 Arts of Jomon (Part 1), showcased Japanese history. The exhibition was a contemporary artistic response to the culture of Japan’s Neolithic period and featured work by multiple artists in a variety of mediums including clay, 3-D printing and acrylic painting. According to Curator Taketo Kobayashi, Arts of Jomon exposed visitors to a fascinating time in Japanese history. The Jomon era lasted around 10,000 years (approximately 10,500 to 300 BCE) and is considered to be one of the oldest recorded cultures in the world. A variety of contemporary artists have responded to ancient pottery and figures in a modern way. In addition, viewers were invited to observe the similarities between Native American culture, a rich aspect of Colorado’s history and Jomon culture.

Curator Taketo Kobayashi said that, although Jomon is a Japanese culture, this is also a universal message of peace for all the world. This culture lasted such a long time because it was based on sharing and tolerance.