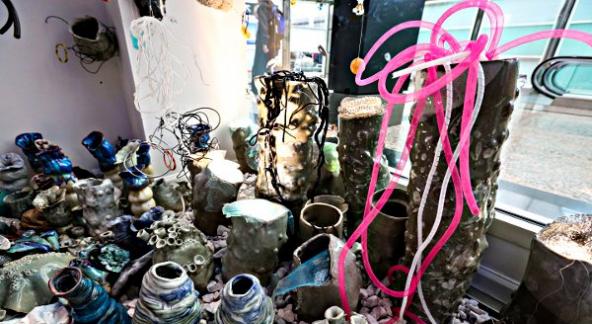 “Acúmulo” was an installation that depicted a loosely interpreted microbiological habitat. Acúmulo is Portuguese for “growth by continued additions.”

Artist Rosane Volchan O’Conor’s biomorphic creation, a world of paramecium, spores and neurons, was composed of materials that included neon light, ceramic, wood, metal and found objects such as: luffa sponges from her hometown of Rio de Janeiro, Brazil; porcelain-dipped Spanish moss from her years in Houston; and industrial materials from Denver International Airport’s recycling collection.

O'Conor has created a video of this exhibit; click here to watch!

Rosane Volchan O’Conor, originally from Rio de Janeiro, Brazil, was introduced to the visual arts and music early in life. Her studies of biology at the Federal University of Rio de Janeiro and of music at the Royal Conservatory of Brussels, Belgium have had a continuing influence upon her creative process. O'Conor is represented by Goodwin Fine Art in Denver.